Call for a better plan to manage dust fall

This article appeared in the local newspaper, The Echo, on December 14, 2017, by Yolanda Du Preez 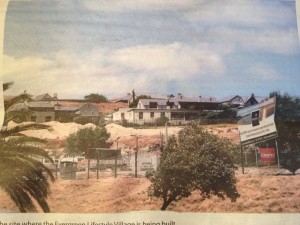 The City of Cape Town is to take a developer to task after dust emissions at an old kaolin-mine construction site near Sun Valley breached national regulations.

The City says it will serve a “final notice” on the Amdec Group and its contractor, Civils 2000, for the excessive dust emissions recorded for November at the site where the Evergreen Lifestyle Village, a retirement complex, is being built.

This comes after months of complaints from Sun Valley residents who say the development has filled their homes with dust that makes them cough, dries out their eyes and makes it hard for them to breathe.

Residents say their complaints about dust at the site have been getting increasingly less attention from the developers since work started in 2015.

Compounding the problem is the Kommetjie Road upgrade by Martin and East, but residents are emphatic that the main source of their dust woes is the Amdec development.

Mayoral committee member for are south, Eddie Andrews, said according to national dust-control-regulations, the prescribed dust-fall rate for residential area is 600mg/m2 a day and monitoring must take place continuously over a 3-day period.

There are six dust-fall buckets on site and four of them are used for regulatory purposes.

According to the November dust-fall monitoring report, three of the buckets met regulation requirements, but the fourth, which monitors dust fall in Sun Valley, exceeded the prescribed dust-fall standards.

Mr Andrews said that meant the site was non-compliant and its dust-management plan either wasn’t working or was not being stuck to.

He said the dust-monitoring consultant’s report suggested the Sun Valley dust unit had either been tampered with or exposed to other temporary sources of dust in the area, such as the roadworks, as the result was out of sync with earlier surveys.

But Sun Valley resident Peter Lombard disagrees. He said that while the roadworks were a contributing factor, the dust problem had started long before them. Dust had been a problem, he said, when the mine had still been operational, but it had been controlled by vegetation, which was removed when Amdec started construction.

During the Echo’s visit to Mr Lombard’s house on Thursday December 7, thick layers of white dust could be seen on all surfaces throughout his house: couches and chairs exploded in a cloud of dust when patted.

Kaolin is a soft white clay used to make china and porcelain and it is also widely used in the making of paper, rubber, paint, and many other products.

According to the South African National Standards (SANS) 1929:2005, slight dust fall is barely visible to the naked eye; heavy dust fall indicates a fine layer of dust on a surface; and very heavy dust fall is easily visible when a surface has not been cleaned for a few days while dust fall levels of more than 200mg/m2 a day are characterised by a later of dust thick enough to allow a person to write word in the dust with their fingers.

The Echo could write the word “Dust” on all flat surfaces in Mr Lombard’s house. Mr Lombard added that his 80-year-old mother who lives with him was diagnosed with bronchitis a few months ago. However, the doctor has now told him that she does not suffer from bronchitis but is instead allergic to “something”.

“We cannot live like this anymore.  We are prisoners in our own homes as we cannot open a single door or window as it will only make the dust worse,” he said.

Another Sun Valley resident, Beatie Nelson, said many residents had lost hope of finding a solution to the problem.

She said according to the 2008 Environmental Authorisation (EA), dust was identified as a possible problem back then. The EA stated that “cumulative construction related impacts that could have a significant negative impact on neighbouring landowners are identified as noise, lighting, traffic and dust.”

Ms Nelson said mitigation recommendations included that contractors must implement a dust-control programme to minimise dust fall for surrounding residential areas, that construction vehicles must comply with speed limits and haul distances must be minimised while material loads must be covered and secured during transportation, that exposed soil and material stockpiles must be protected against wind erosion and that the location of stockpiles must take into consideration the prevailing wind directions and that the contractor must implement dust suppression measures such as water spray vehicles when required.

She said the EA management plan also said work could be stopped when the wind was strong and that had since been written into an amended EA for the site.

An EA, she said, was a working document that laid out the conditions under which a project could go ahead and it could be amended if necessary.

“In my mind, it is quite clear what measures could have been taken right from the start to mitigate the dust problem,” she said.

Ms Nelson said she had repeatedly asked Amdec Evergreen’s own environmental consultants to make the dust-monitoring results available to the residents, but that had never happened. “This tells me only one thing: they must be hiding something,” she said.

But Mr Bedeker said the EA’s recommendations were being followed and the site’s dust-management plan was based on best practice and exceeded those required by law.

He listed several steps being taken to limit the dust:

Evergreen, he said, would ultimately own and operate the completed Evergreen Lifestyle Village so it wanted to establish long-term relationships with its neighbours. “Our appointed contractors have a zero-tolerance approach to mom-compliance, and we have, as a precautionary measure, instructed our appointed contractors to implement further dust-mitigation actions to ensure best practice approach to dust management,” he said.

But residents say Mr Bedeker has been unaccommodating and told them to “think twice” before going to the media or social media long with other subtle threats.  He denies the allegation.

Coarse dust particles generally only reach as far as the inside of the nose, mouth or throat while smaller  or find particles can get much deeper into the sensitive regions of the respiratory tract and lungs and have a bigger potential to cause serious harm to your health.

Commonly, particles in air-borne dust tend to be coarse or non-respirable and do not pose a serious health threat tot he general public.

However, people with respiratory conditions, such as asthma and emphysema, may experience difficulties.

He said the most common symptoms experienced during exposure to excessive amounts of dust were irritation to the eyes and upper airways.

People who may be most vulnerable are infants and young children, the elderly, people with respiratory conditions, such as asthma, bronchitis and emphysema and people with heart disease.

“Exposure to dust can trigger allergic reactions and asthma attacks, cause serious breathing-related problems and can contribute to cardiovascular or hear disease,” he said.

Dries Visser, from Martin and East, the roadworks contractor, said due to the nature of the work dust would always be present.

He said in order to avoid dust becoming airborne, a layer of granular material was placed on most of the exposed surfaces of fine material which has reduced the potential dust problem.

“Martin and East is aware of the dust problem in the Sun Valley are and its staff is doing their best to control dust generation,” he said.

The roadworks, he said, would be suspended for the builders’ holiday period from Friday December 15 to Monday January 8 next year.

The contractor planned to treat exposed areas with an environmentally friendly water additive to form a protective membrane that would control dust for few weeks depending on traffic volumes.

Civils 2000 did not respond to questions by the time this edition went to print.