A cost-effective alternative to conventional dust fall-out monitoring technology has been designed and developed by local company DustWatch and Hygiene Engineering (DustWatch) and is in operation at numerous mines and industrial sites in South Africa and Botswana.

The patented DustWatch fall-out dust monitoring units, which are used where material is conveyed or moved in such a way that fine dust particles are liberated, collect dust samples using the bucket-collection method (an internationally recognised method of determining fall-out dust from various sources).

Fall-out dust monitoring is a legal requirement by the chief pollution control officer, under the Atmospheric Pollution Prevention Act.

Under this act, all manufacturing concerns are responsible for the dust at the perimeter of the area.

If dust levels measured are above the specific limits, then engineering solutions must be implemented to decrease the fall-out dust levels. DustWatch was developed from concepts rather than designed from scratch as a single stand-alone product.

“Many existing dust fall-out monitoring technologies employ electronics to allow operation of the systems, which we found are difficult to maintain and most have their shortcomings,” notes DustWatch principal Gerry Kuhn.

“We saw the need to develop a simple unit, which requires little maintenance to do the required sampling, that can be used anywhere, is cheap in capital cost and can be operated with little training.

“We wanted a unit that could eliminate most, if not all, of the drawbacks of other systems,” he outlines.

The provisional patent was registered after almost 18 months of exhaustive trials and, in September, the company’s PCT international application was lodged.

While the present production mode has been standardised on two or four wind directions, prototypes have been constructed to suit particular prevailing wind patterns, offering three or more directions.

Most imported and locally- produced units use only a two-bucket system.

Kuhn made use of aerodynamics to eliminate grit from the samples and, as a result of this thinking, the unit collection bucket is 2,2 m above the ground.

The units are totally mechanical and are operated by the wind, the direction of which opens or closes the relevant sample bucket to the atmosphere.

There are currently over 60 of these units in operation, predominantly in the Western Cape, but also in the Northern Cape, Gauteng and Botswana.

These are in place on diamond-, dolomite-, gold- and iron-ore-mines, cement factories, smelter operations and lime works, as well as at a quarry operation, a foundry and for town import sampling.

DustWatch has also had success in monitoring saprophyte-type airborne bacteria migration from composting plants using the DustWatch units and has had results up to four kilometres from the contamination source.

Kuhn regards the combination of units together with efficient service and periodic auditing to be one of the most cost-effective methods of dust-monitoring, meeting the requirements of the chief pollution control officer.

A typical dust report issued by the company would include the actual values precipitated on an ongoing basis.

From this, a trend line can be produced with the results viewed against previous months or years, an indication of organic substances and pollen-count can be given, an analysis can be undertaken of the captured particulate and the position of polluting sources can be located and the efficiency of controls evaluated.

‘We believe that we have provided a solution to dust- monitoring in its simplest form,” explains Kuhn. 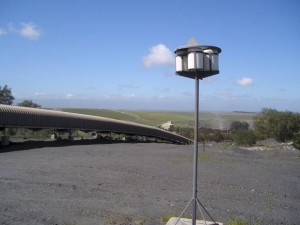